Associated with women and domestic life, geese and ducks are the only beings capable of travelling undisturbed through the three kingdoms, land, air and water.

They were the inseparable companions of Reitia – the divinity venerated by the ancient Veneto populations of the Upper Adriatic – they were always represented together with the meek wolf and the magic key, and they brought the gift of the ability to cross the various worlds.

Reitia embraced nature, she was nature, and nothing existed beyond her, she was the Goddess of childbirth, woods, water and wild animals. She was beyond time and space, she weaved the web of life drawing strength from herself, undisturbed mistress.

The geese are replicable in every size and in every position.

For exhibitions, rentals or other commercial information, please contact: marketing@juliaartico.it

The installation by Julia Artico, Between Earth Sky and Water, is the most figurative, as it represents five geese and a cello built with straw and hay.
The geese mean the union between earth and water, the gaze to the sky in a unique balance.
The goose is the animal symbol of this union between the three elements.
Hay is a traditional material in the hands of this artist.
With this material she creates a naturalistic scenography, a poetry of the tangible, an invention of the continuum with one's own nature; not as an evocation, but as a game of interpenetration with one's own grass transformed into an image, in the same way as those who work with the material of dreams and convert them into a bucolic film, into an installation like a pastoral.
For Artico, the convent garden is transformed into a land of wisdom (le terreau de la sagesse); it is not a philosophical garden nor a reflection of a spiritual experience, but the place to transmit a primordial, childish knowledge of purity and play, a primary wisdom of simply feeling with one's own grass, with one's own hay, converting to nature a beautiful comedy made of dreams. So that the function of art is to re-educate oneself in simplicity and Franciscan love with sister goose or brother cello.
For Artico, as well as for French philosopher Maurice Merleau-Ponty, matter is an extension of oneself, something that an informal like Antoni Tàpies knew from the very first moment.
"The thickness of the body, far from competing with the world, is on the contrary the only way I have to get to the heart of things, becoming world and turning it into flesh" says Marleau-Ponty.
If Tàpies uses whatever he holds in his hand, a sex, for example, made with the bristles of a brush, with Artico simple hay is the material with which to build your dreams. 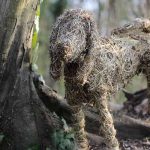